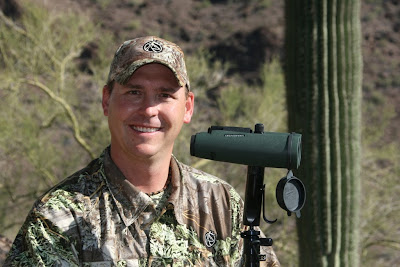 Trent Swanson has dedicated his life to hunting, fishing, and the outdoors. His folks started him out by exposing him to the outdoors before he could walk. He was fishing soon after and hunting by age nine. He received his B.S. in Forestry from Northern Arizona University and worked for the Forest Service during college. In 2000, he served as the Campaign Coordinator for Arizona Ballot Proposition 102, which would have limited animal rights groups from affecting public policy. He then went to work in the outdoor recreation industry, first managing a shooting sports complex in the mountains of Colorado, and then taking over the reins of a hunting and fishing guide service. Besides management responsibilities, he was a sporting clays instructor and guided clients on bird hunts, big game hunts, and fly fishing trips. Recently, he was an owner and Vice President of Taylor & Associates, Inc., a company specializing in risk management for the outdoor recreation industry.

Outdoor writing and photography provide the framework for Trent’s freelance career. For seven years he worked with Western Hunter, a magazine dedicated to the gear, tactics, information, and adventure surrounding hunts in western North America. He helped out in all aspects of the magazine’s production including writing feature stories, product reviews, and a column, assisting with layout and design, and proofreading the entire magazine. Trent also has had stories and photographs published in a number of local, regional, and national publications. To provide an insight into his sporting life and outdoor mentality, and the gear it requires, he maintains a blog at www.TrentSwansonOutdoors.com.

As of November 2011, Trent accepted the position of Mountain Territory Sales Representative with SWAROVSKI OPTIK. With a strong background and passion for high-end optics, Trent found his dream sales job. He is responsible for all sales within New Mexico, Colorado, Wyoming, eastern Montana, and the western parts of North Dakota, South Dakota, Nebraska, Kansas, Oklahoma, and Texas. He specializes in the hunting market, calling on independent dealers as well as national chains, but is also rapidly learning the ins-and-outs of the birding market.

Trent has hunted or fished in most of the western states, Belize, Canada, Kiribati, and Mexico. He is a member of many national and statewide conservation groups and participates in Project CENTRL, a rural leadership program. He recently moved back to the mountains of his home state of Colorado with his wife Nichole, a Doctor of Physical Therapy, their young son Mattox, two cats, and Lacey and Ruby, their champion-bred yellow Labrador retrievers.