The draw results are out:
I drew a muzzleloader mule deer tag for the desert in December!
I drew this tag a couple years ago, but got unlucky on the one great buck we found. I hope to capitalize on my previous knowledge, and get some more great help from the Scott brothers of Southwest Hunting Adventures. This is one of those classic glassing-intensive/spot-n-stalk hunts that I love.
Did anyone else draw a deer or sheep tag?
Posted by Trent Swanson at 12:50 PM 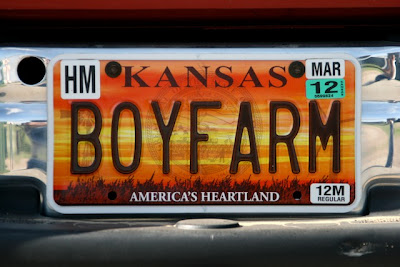 Once wheat harvest was finished, Heath had to start spraying. One of the practices that Heath has helped implement is no-till farming. The basic idea is to conserve moisture in the soil, they don't disc up the ground to kill weeds. Instead, they use herbicides. This year, when the wheat crop only had about 3 inches of rain, they were able to reap fairly good yields from their practices. The downfall is the cost of the chemicals.
For me, the biggest downfall of spraying so far was the nearly eight hours we spent trying to repair the main pump on the sprayer. It wouldn't seal appropriately so we had to keep taking it apart, and then reassembling it. No one planned to stand in the sun for eight hours - my burned and peeling neck is proof! We finally got it to work and a couple days later after it rained we headed to Garden City for some errands. One of the stops was the spray shop... it turns out that one half of the pump is just plain wrong. The next time the seal fails, they can replace the defective part, which should fix it for good. 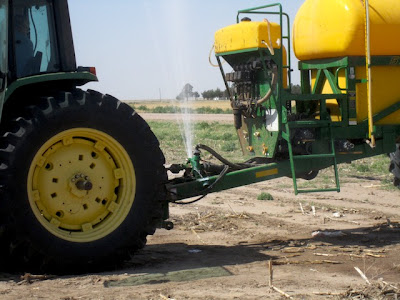 The broken pump spraying herbicide all over. 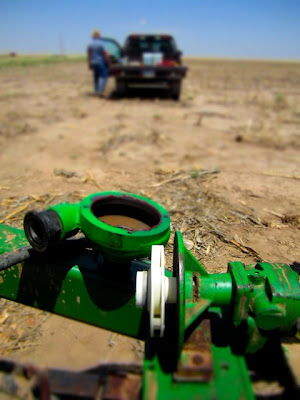 The two halves of the broken pump. 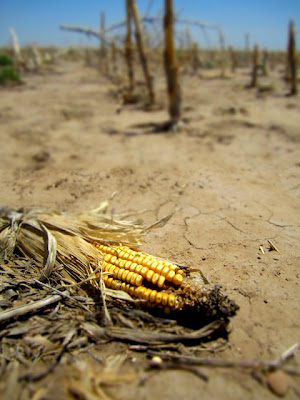 Last year's corn stubble Heath was spraying when the pump broke.
We also started having a little fun chasing coyotes and prairie dogs. Nichole's dad has been on a prairie dog eradication program, so where there once were hundreds, there now are just a few. I did get a chance to unlimber my Larue AR-15 on a couple. My longest confirmed kill so far is 238 yards... and Mattox got to watch! Sadly, it's hard to get a good photo of a blown-up prairie dog, or at least one suitable for posting so I just have one of Mattox and me after the fact... 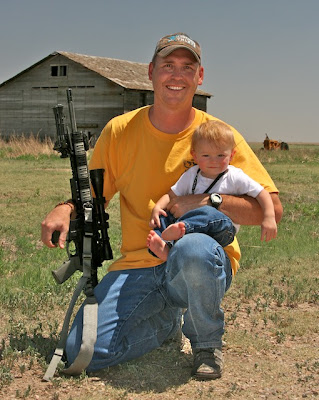 The prairie dog whackers.
Less time on the combine has also given me a chance to take some photos of the other critters on the farm: barn cats, burrowing owls, cottontails, and cattle. 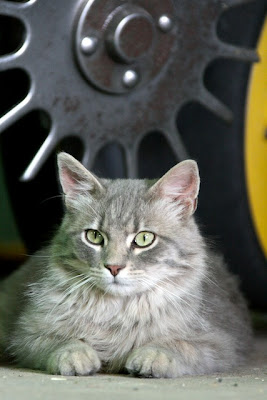 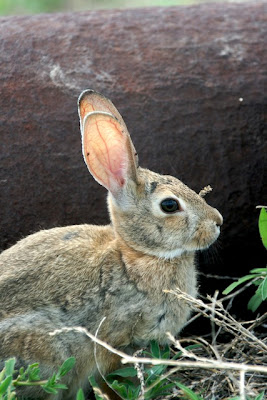 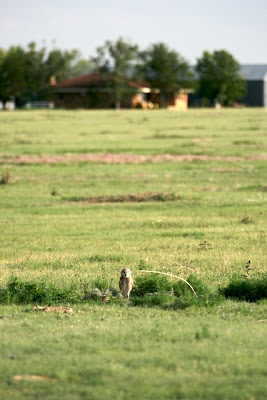 A burrowing owl in the farm pasture. 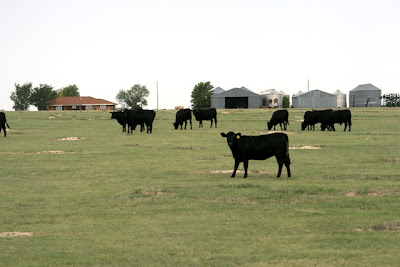 BoyFarm heifers with the farm buildings in the background. 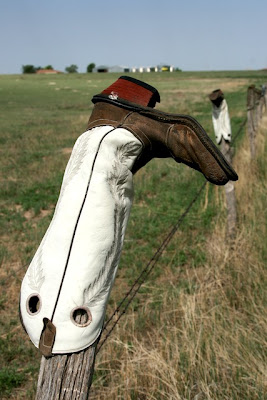 Old boots lining the fence along the county road.
Posted by Trent Swanson at 8:20 AM 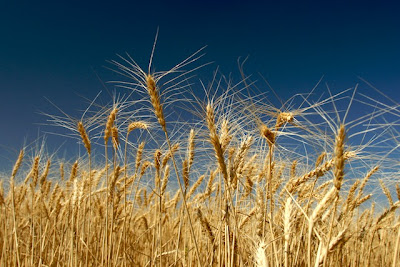 There's something very empowering about running the combine. Not only do I have control of a massive machine with tons of moving parts, but I also am contributing to the success and well-being of the family farm. With every pass, I share in the hard work and legacy that has been passed down through multiple generations. Nichole's grandpa farmed some of the same ground her dad and brother are farming today. Her other grandpa farmed in Oklahoma and Kansas, and had a custom cutting business, too. 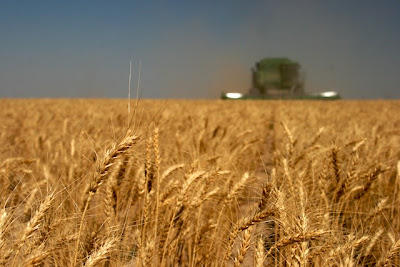 Between Nichole's brother and dad, they have more than 80 years of farming experience. What's really cool is they seem to balance her dad's old-school farming practices that built the farm with her brother's new-fangled ideas and processes. It's clear that to be successful you must have both strong roots and branching limbs. 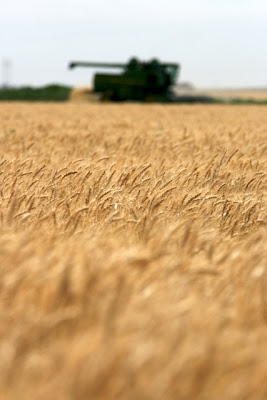 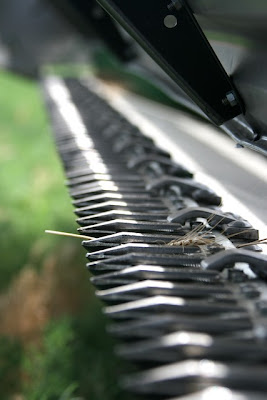 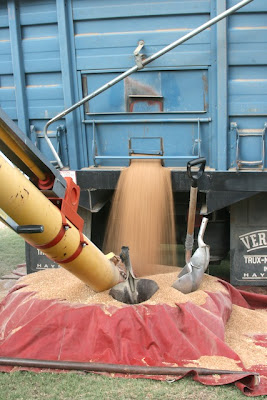 Unloading wheat at the house for storage in the bins.
After harvest finished, one of the main chores we tackled was cleaning the combines. With an air compressor we blew off every nook and cranny where dust and chaff collected. It is one of the dirtiest jobs on the farm and luckily we chose a day when the wind was blowing. Not only did it keep us a little cooler, it also moved most of the dirt away. 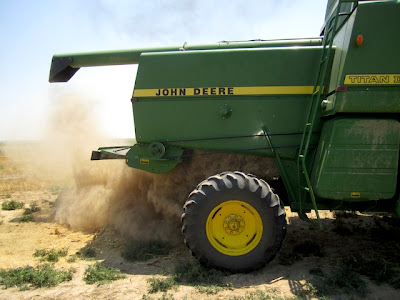 Once we loosened up a bunch of the dirt, Heath started up the combine to move it all out the back end.
Posted by Trent Swanson at 9:43 PM 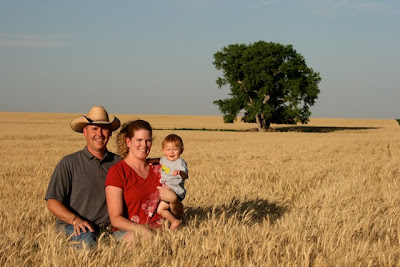 The Tree Quarter/Lone Tree Field.
Nichole and I loaded up Mattox, the two cats, and two dogs, and then headed to Western Kansas to help Nichole's family with wheat harvest. On the way in we saw deer, antelope, and quite a few pheasants. A couple fields got hailed out just a few days before needing cut, and the custom cutters took care of a bunch of fields. That meant that our part of harvest only lasted six days - a record for sure! 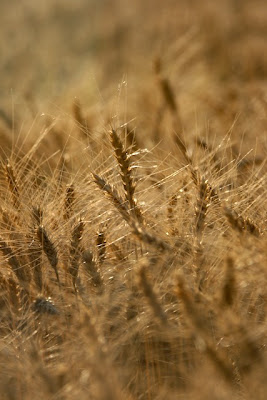 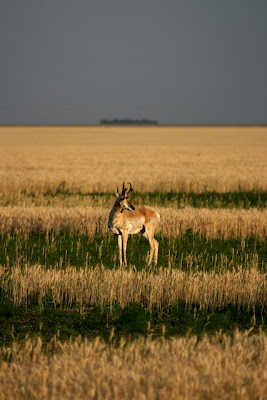 On our way to the farm we spotted deer, antelope and pheasants.
The first day we arrived, we fed the baby calf, rested, and took some photos at the Tree Quarter, which is the lone tree on the farm, and THE lone tree used for Nichole's business logo. There just happened to be a whitetail doe bedded near the tree that posed for a couple photos before we posed for photos. The next day we started cutting. Nichole took a couple breaks to nurse Mattox when her mom brought him to the field. Otherwise, we were on the combines for about 10 hours. Each day was similar to the next... up early to feed the calf, check the wheat, haul water to the cows, service the combines, and then cut until 9pm or so. 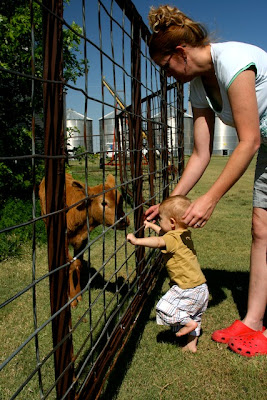 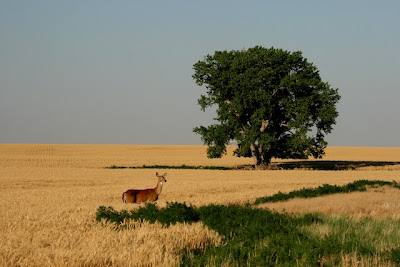 A whitetail doe posed for photos, too. 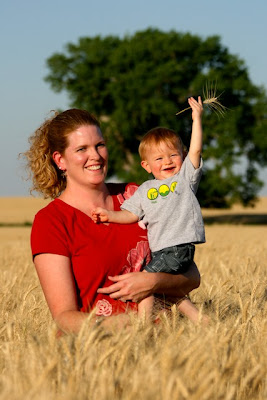 The best girl and the cutest boy in the world!
One night as we were making the first pass around a field straddling Mattox Draw (yes, THE Mattox Draw), I noticed the bin in my combine had way too much chaff. It turned out that a bracket broke, which caused one of the main separating fans to stop working. A quick weld the next day, along with a new bearing, fixed it like new! 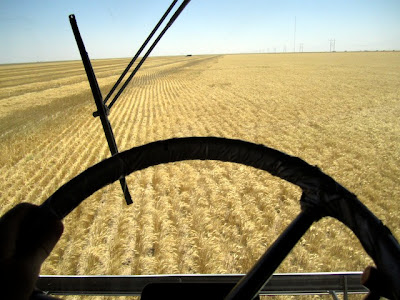 The view from the combine. 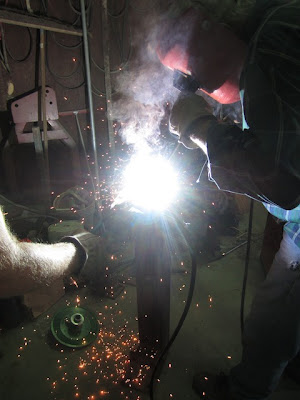 One quick weld and my combine was back in the game.
Posted by Trent Swanson at 9:17 PM