After taking the full-body cape to Marc Plunkett of Wildlife Creations Taxidermy in Camp Verde, AZ (928-567-6890), Erik took his ram to AZGFD for the mandatory check-in. The biologist aged it at six-years-old and gross scored it at 168-7/8, with a net of 167-6/8! It might just miss the B&C all-time book, but when a sheep is that georgeous and was that fun to hunt, who cares?

Be sure to check out Jay Scott Outdoors for an awesome video of the hunt and a bunch more photos...
Posted by Trent Swanson at 9:33 PM 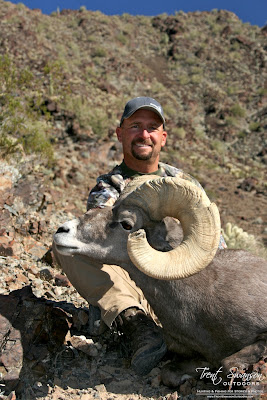 I'm sorry we have not done too well with the updates. Early mornings, long days, and late nights were the norm during the hunt. We all split up and covered a ton of ground in trucks, on quads, on foot, and sometimes all three. We explored some amazing country, glassed until our eyes fell out, hiked ourselves sore, and had one of the best hunts of all time.

On Sunday morning, after much deliberation the night before (and a sleepless night for Erik), we went back to find Pinky, the ram AZGFD found during their survey and Erik and Jay had been keeping tabs on before the season. Although we didn't think he would score tremendously high, Erik decided that his size was not the most important thing; experiencing the hunt with his friends and family mattered more than a couple inches. It turns out that he got both his wishes: an awesome ram hunt shared with his closest hunting buddies and a spectacular ram that grosses nearly 168 inches, the Boone & Crockett minimum.

Following are just a few of the 574 photos I took yesterday. Be sure to check out Jay's blog at Jay Scott Outdoors for more photos and video. I know he was working on editing the video and should have something posted soon - he even got the kill shot on video! Thanks for checking in... I will post more later about Erik's hunt and all the awesome equipment and strategies we used. 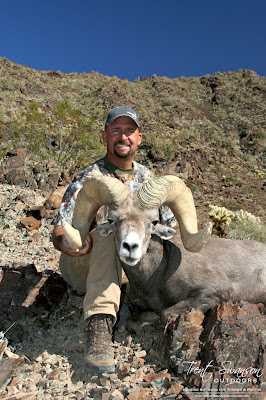 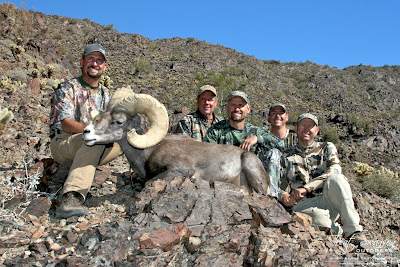 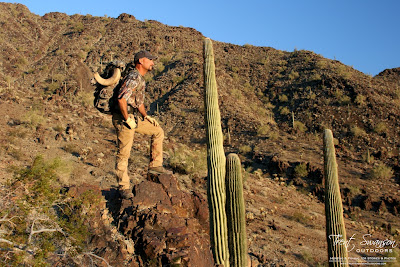 Posted by Trent Swanson at 4:29 PM

I know many of you are wanting to hear an update about Erik's hunt... One ewe and one tiny ram on day one. It was a cold, windy day that found us bundled in all our clothes and trying to keep on the lee sides of the hills. Day two: "The most wonderful sheep hunting day possible," according to Michael Sisk, one of Erik's best friends. Jay and my step-dad Rob found three ewes and a 160-class ram, but Erik, Michael, and I saw nothing. We are all a little discouraged, but there are still 29 days left. I'll post photos later! Make sure you check out Jay's blog at Jay Scott Outdoors. (He's not back to camp yet...)
Posted by Trent Swanson at 8:35 PM