One of the most obscure birds to hunt in Arizona is the Sandhill Crane. All tags are issued through a drawing for hunts that mainly take place around Willcox and the Sulphur Springs Valley in southeastern Arizona. My brother Erik and I first were drawn back in 2004, and have hunted four other years since then. Most of our efforts have been focused on the Kansas Settlement area because we have a good friend whose family farms in the area. We have not been successful on every hunt, but we usually are able to convince a couple birds to at least fly by our decoys. 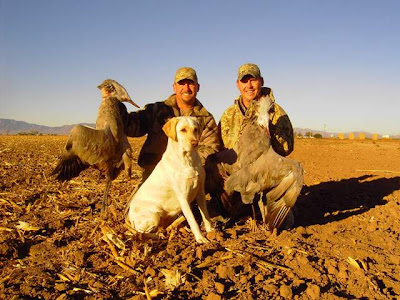 Results of our first Arizona Sandhill Crane hunt in 2004. 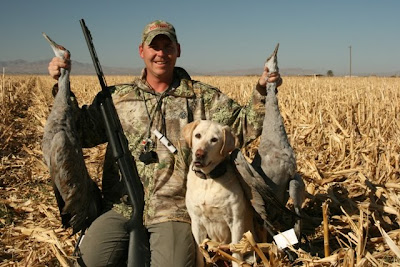 When drawn, you are allowed two birds. 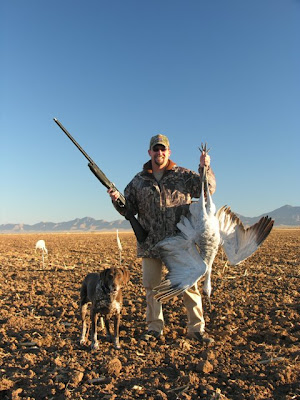 Erik shot this greater, which was nearly twice as big as the more common lessers.

We typically set out a dozen silhouette decoys in picked corn fields or cut milo fields, and then do our best to hide nearby. As the birds lift off the Willcox Playa after roosting there for the night, we use binoculars to spot the birds coming our way. We have found that flagging helps tremendously to bring the birds towards us. Once on the way, we do a little calling and hope the birds stay low enough to be within range. Our shotguns of choice shoot 3-1/2” Hevi Shot Dead Coyote T’s through Patternmaster Chokes. We have found the combination to be deadly, especially on such large birds at long ranges. 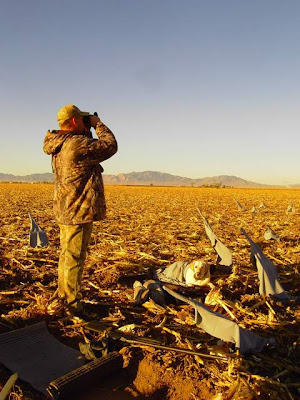 We use binoculars to glass for cranes as they leave their roost in the morning. 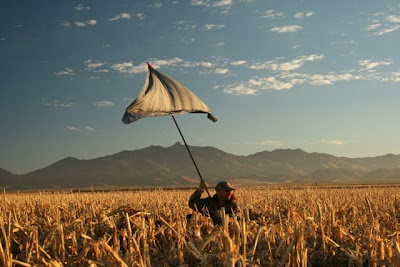 Once spotted, our homemade flag lures the cranes close.

I always took Lacey with me, but made sure that the birds were dead before allowing her to make a retrieve. An injured crane, with its long beak and poor demeanor, can be dangerous to a dog. However, as long as they are dead, there is nothing like watching a Labrador bring back a bird that is nearly twice as long as her! My brother took his German Shorthair on a few of the hunts, too. The crane hunt is a perfect hunt for kids to come along, so as soon as Erik’s oldest son Teague was old enough to join us, he became part of our hunting crew! 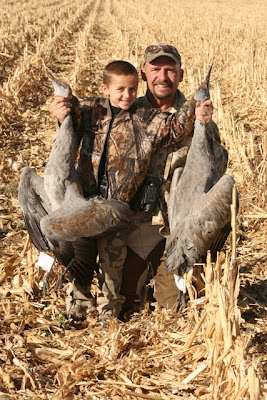 A crane hunt is perfect for kids! 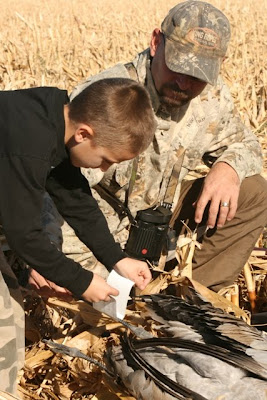 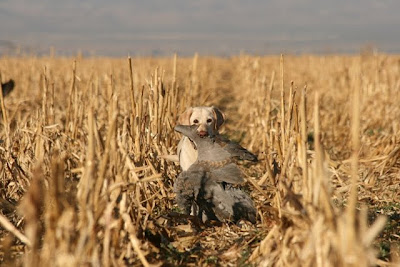 A crane tends to be a mouthful for a Labrador, but Lacey always figured out a way to bring them back!
Posted by Trent Swanson at 9:12 PM 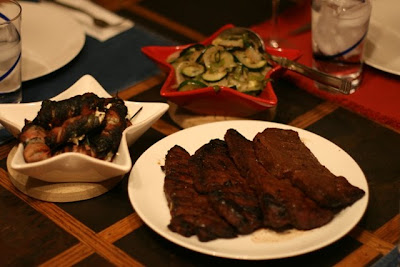 For the past few years, Nichole and I created quite the garden and incorporated its bounty into our meals. For this supper, we prepared marinated elk steaks, bacon-wrapped homegrown jalapeños, and sautéed homegrown yellow squash and zucchini.

For the elk steaks, I used my ol' standby: Trent's Secret Wild Game Marinade, and then cooked them on the grill to medium rare. We stuffed the jalapeños with a cream cheese/cheddar cheese mixture, wrapped them in bacon, and then grilled them alongside the steaks. For the squash, we just sautéed the slices in some butter with a few requisite spices like garlic, basil, and oregano.

It was a simple meal to prepare, satisfying to know it was mostly either shot or grown by us, and delicious to boot! 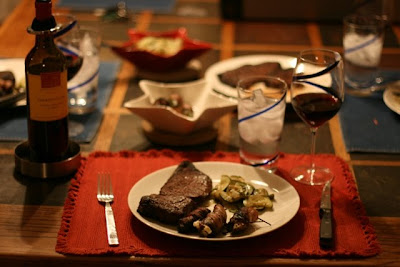 On Saturday May 14, 2011, join fellow politically-motivated hunters and conservationists for the third annual Arizona Sportsmen for Wildlife Conservation (AZSFWC) Heritage Banquet. This year’s keynote speaker will be Former Vice President Dan Quayle and the Honorary Co-Chair will be Arizona Governor Jan Brewer.

AZSFWC and its partner organization, Arizona Sportsmen for Wildlife (AZSFW) are the pre-eminent political voice for sportsmen in Arizona. The organizations include as members nearly all the sportsmen groups across the state such as the Arizona Elk Society, AZ Deer Association, and the Yuma Valley Rod & Gun Club.

Last year’s event featured Sarah Palin and was attended by more than 700 people. This year’s event takes place at 4:00 p.m. at the Fairmont Scottsdale Princess Resort. Individual tickets are available for as little as $125 and sponsorships of all levels are also available. Log on to the AZSFWC website for more information and to purchase tickets. Hope to see you all there!